Driven by carbon dioxide, the system can deliver either subcutaneous or intramuscular injections.
By Julie Barton Miller

Ten years ago, Elizabeth Saavedra, RN, BSN, picked up a discarded package from a table in a treatment room and was stuck by a used needle protruding from the package. A month later, Saavedra became ill with acute hepatitis. Today, she suffers from chronic hepatitis, and her liver is becoming cirrhotic.

"I may need a liver transplant," she says. "If needle-free injections had been in use, my injury would have been prevented."

An estimated 590,000 needlestick accidents occur every year, according to the Occupational Safety and Health Administration. Now that a number of states have passed needle safety laws and other states are considering legislation, some health care facilities are adopting needle-free injection systems. (See UPDATE: Needle-Safety Scorecard by State.)

Universal Care Medical Group, the HMO in Signal Hill, CA, where Saavedra works as an employee health manager, uses the Biojector 2000 (a trademark of Bioject Medical Technologies, Inc., Portland, OR) needle-free system at 11 company-owned clinics in Orange and Los Angeles counties. California law requires the state's health department to adopt a bloodborne pathogen standard that includes the use of needle-free systems.

On the other side of the country, at the Pasco County Health Department in Florida, public health nurses are less fearful of needlestick accidents now that the department uses the Biojector, according to Carol Cummins, RN, MSN, ARNP, the department's executive community health nursing director.

Powered by carbon dioxide
The Biojector, which delivers variable doses of medication up to 1 ml, consists of two parts: a handheld, reusable injector and a sterile, disposable plastic syringe. According to Bioject, the portable injector is approximately 8 inches long and weighs 1 pound, 4.5 ounces.

The device employs compressed carbon dioxide to deliver medication through the skin without a needle. Each carbon dioxide cartridge provides an average of 10 injections before needing replacement. The carbon dioxide provides pressure on the syringe's plunger, propelling medication into the tissue. The gas doesn't come into contact with the patient or the medication.

Users can attach the injector to a large carbon dioxide tank designed for immunization programs. A tank adapter eliminates the need to change carbon dioxide cartridges after every 10 injections.

The syringe, the second component, is wrapped in a sterile, peel-open package that also holds a needle-free vial adapter, used to draw medication from a vial into the syringe, and a safety cap. A needle used to fill the syringe can be supplied upon request. Five different syringes are available, each intended for a different injection depth or body type. Depending on the type of syringe selected, the Biojector can deliver either subcutaneous or intramuscular injections.

High-speed delivery
The syringe body is transparent and has graduated markings to ensure accurate filling. The nurse giving the injection checks the carbon dioxide pressure on a gauge on the injector and draws medication into the syringe using either a needle or the vial adapter. The safety cap, placed over the filled syringe before injection, prevents contamination. After inserting the syringe into the injector, the nurse removes the protective cap.

The nurse presses the syringe tip against the patient's skin at a 90-degree angle and presses an actuator. A thin stream of medication is expelled at high speed through a small opening in the syringe. The injector deposits medication into the tissue at the desired depth in about a quarter of a second. Because the disposable syringe is the only part of the system in contact with the patient's skin, the risk of bloodborne pathogen contamination is eliminated.

After each injection, the old syringe is discarded and a new one inserted for the next patient. The Biojector can be used for up to 100,000 injections, according to Sam Nickerson, Bioject's product manager.

Patient reaction after a Biojector injection is the same as it would be with a needle-and-syringe injection, Saavedra says. Certain medicines contain additives that cause stinging or burning, and this effect doesn't change with the Biojector. 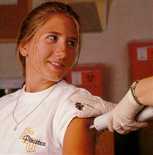 At the Florida county's five health clinics, where youngsters and teens are immunized using the Biojector, the device gets high marks. It eliminates the cost of disposing of used needles, and there is little or no waste of vaccines, a common occurrence with needle and syringe. Public health nurses like the speed at which the needle-free injection is delivered, and children are less frightened when they see there's no needle involved, Cummins says.

Most important is protection from needlestick injury, which outweighs the higher cost of the device compared with the needle and syringe.

"It's hard to put a price tag on someone's life," Cummins says. "If an employee is stuck by a contaminated needle, there would be a price tag none of us would like to face."

Saavedra agrees that the higher cost of the Biojector pays off in the end. "Needlestick injury for the healthcare provider has been minimized," she says. "It's a great invention."

Back to top
Julie Barton Miller, who lives in North Stonington, CT, is a freelance writer with extensive experience covering health and medical topics.